Elfo begins by being dissatisfied with life in Elfwood. For him, something does not seem quite right. He has had enough of being happy all the time - suffering the elvish equivalent of depression. Making candy all day to get paid in candy just doesn't make sense to him anymore. As such, he savvy of his own genre and has outgrown his elven tropes. He craved freedom and adventure. To that end, he desires to see the outside world, despite how unscrupulous and miserable it may be.

Life outside the walled kingdom of Elfwood is a steep learning curve for Elfo, and the longer he is in exile the more his personality evolves. For example, gets drunk and has fights, he is subject to human experimentation and he experiences love with a human for the first time. When it comes admitting his crush on Bean, his shyness leads him to lie - he makes up a girlfriend as a cover story to disguise his feelings. Luci's demonic presence also influences him and he even uses Luci's tail to hit him. He gets more savvy as his adventures progress, and his character develops greatly, as does his isefulness. His ability to read makes him an invaluable asset to his new adoptive family, as he remembers reading in the guide book - Frogo's Best Of Dankmire - of the location of a hidden lever in the dining hall. This proves crucial for the safe escape of the Royal delegation. 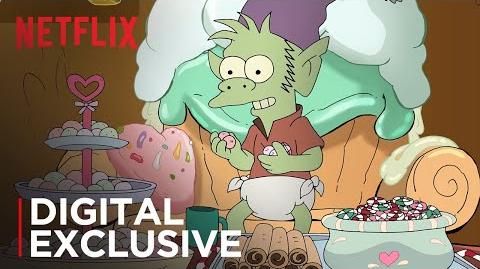