Fairies are a magical species in Disenchantment. There are several known fairies, with one, Sagatha, known to be living and working in the Enchanted Forest. It is strongly implied that the fairies are prostitutes, especially Sagatha.

The fairies create the "Party in Dreamland" sign using their magic in "Castle Party Massacre".

In the same episode, the fairies help Prince Derek become a man. 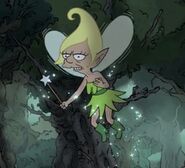 Sagatha in the Enchanted Forest.