Last Splash is the sixth episode of season 2, Part 1 of Disenchantment and the twenty-sixth episode overall. It premiered on January 15, 2021.

On their return trip to Dreamland via steamboat, lovelorn Elfo winds up in an unusual relationship while Bean gets close to Mora the mermaid.

Bean and Elfo are still fleeing from the lightbulb robot when Eflo realizes that Mora is still locked in P.T.'s Freak Show. The two of them free Mora, who then jumps into the sea through a hatch in the floor. On the pier they meet the light bulb robot again and they both hide in a playroom, where the robot follows them. With a clever deception they destroy the robot. And pursued by the other robots, they run to the boats. When they hijack Alva Gunderson's private ship, they initially have difficulties starting the ship, but by chance Elfo make it.

Alva Gunderson appears on a television set and begs Bean not to leave. After she has destroyed the television set, Alva tries to use various loudspeakers, but Bean also breaks them all. Bean looks out the window and notices that they are not going because the boat is tied up with a rope and the robots are trying to build a bridge with a board to get on the ship. But Mora emerges from the water, loosens the rope, causing the light bud robots to fall into the water and is then pulled onto the ship by Bean. Who thanks her for the rescue and offers to come with them, which she does.

Elfo is still trying to get over his broken heart and when the steering wheel, in a wave, knocks Elfo on his bum-bum, he falls in love with the ship. He call her Missi (short for Miss Adventure which would be the real name of the ship). Suddenly the ship stops and Elfo looks around the engine room to try to repair the ship. Meanwhile, Bean and Mora get a little closer. Mora tells Bean that she came to Steamland to become an actor, but because she had no legs she was hired as an animation dubbing artist. Meanwhile, Elfo was able to repair the ship. After Bean tells Mora that she kissed Elfo, they talk about their previous relationships, which makes it clear that Mora is a lesbian. During the night, Mora tells Bean something about the night sky and how the mermaids use it as a guide. You can clearly see that the two are beginning to fall in love with each other.

The next morning Mora has disappeared and Bean and Elfo drive on without her. Because of the heavy fog, your ship hits a sandbank and Bean, sitting on the railing, is thrown from the ship and hits a stone with her head at a beach in Dreamland. The hit causes her to pass out and the last thing she sees is Elfo, who wants to get help. Some time later she wakes up and sees Mora in the water in front of her, who persuades her to come into the water, they swim together to Dreamland. (If you hold a mermaids hand, you're able to breath under water)

Arrived at the mermaid island, Mora says that she left because she didn't want to get hurt and came back because she never learns. The other mermaids warmly greet Mora and celebrate a festival in honor of her. Towards evening Mora Bean wants to show a special beach that she always goes to to clear her head. She gives Bean a necklace with a gold starfish and sings her a beautiful song, accompanied by a ukulele. After this song they kiss and spend the night together on the beach. The next morning, Bean wakes up on the beach where she hit her head and is desperately looking for her necklace. But when she couldn't find it, she believes it was all just a dream. Elfo, who couldn't find any help, tries to get Missi back into the water, but she sinks. Both are sad about their lost love and walk sadly along the beach.

At the end, the audience sees a wave washing Bean's necklace ashore and then washing it back again. So Bean thinks that maybe it never happened and only the audience knows what really happened.

Mora: "Take it off, Bean."
Bean: "I don't know, I love this boot. We've been through a lit together. And what if I find my other boot?"
―  Mora takes off Bean's shoe and throws him overboard into the water.[src] 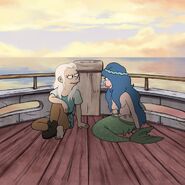