Love's Tender Rampage is the seventh episode in the Disenchantment series. It premiered on August 17, 2018.

Elfo lies to hide his feelings for Bean, but things get complicated when she tries to help him by sending the knights on a quest.

After a night out drinking, Bean, Elfo, and Luci pass out in the gutter. Mistaken for dead bodies, they're added to the town's plague pit to be burned. The pit is lit on fire and during the tense and terrifying moment where they think they're about to die, Elfo thinks he's about to kiss Bean. Luckily, Luci finds a conveniently placed ladder before they're burnt to a crisp and the three escape.

Elfo's still disappointed which Luci picks upon. Trying to put on the bravado that he doesn't have feelings for Bean, Elfo begins making up an imaginary girlfriend. Describing her as a huge, one-eyed, redhead.

Bean hallucinates this beauty while passing through an opium den and sends out some knights to retrieve this mysterious girlfriend. Surprisingly, the knights do return with a woman matching the description, though they have her chained up like a beast and she acts aggressively towards everyone else. They send her to the Cheese Den, a dungeon used for cheese storage, and lock Elfo and her inside.

After a disastrous double date with Elfo and the giantess with Bean and the captain of the knights, she reveals her name as Tess. Tess is an intelligent and eloquent person and does not appreciate being treated like an animal. This proves to further complicate Elfo's lie since Tess can just refute their relationship. So, Elfo offers to give her an eye if she goes along with the ruse and accompanies him to a ball that's being thrown in the castle.

Elfo gives her a crystal ball to use as her new eye, and while theoretically, it can see things, it doesn't actually help her much. At the ball, a series of accidents causes Tess to look like a rampaging giant.

A mob forms to chase her down, but Bean and the other two help Tess escape. They lead the mob through the Den of Wonders, the opium place, which makes the gathered people hallucinate and chase after a dragon. The drugs also have Bean and Elfo share a kiss, although that too may have been a hallucination.

Pendergast: Turbish, no! Your horse is still alive!
Turbish: (Lets go of arrow in shock) Whaa?!

“The hell is wrong with you people?! Get these things off me! (Pendergast and Bean remove the chains strapping Tess) I am not a monster! I'm a person, with thoughts and feelings! For God's sake, I'm a grad student!”
— Tess

“(speaking normally) Ugh! That was stuck in my throat for days! Oh, my mouth tasted like a borne...”
— Tess 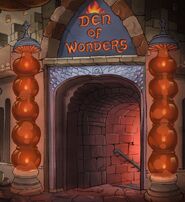