"A Princess, an Elf, and a Demon Walk Into a Bar"

"I would get rid of all diseases plaguing mankind, and replace them with worse ones. Ooh! and make Elfo die alone."

Luci is the deuteragonist in Disenchantment. He lives in Dreamland, is Princess Bean's "personal demon", and was the owner /bartender at Luci's Inferno. He was voiced by Eric Andre.

Luci was a demon from Maru who has been magically summoned by the Enchantress and Emperor Cloyd of Maru to act as their emissary. He was presented to Bean in the form of a wedding gift.

After being decapitated by an elevator, Luci finds himself in heaven. Luci is sent to earth when God sends Jerry down, and he hides in Jerry's parachute. He, Bean, and Elfo reunite his head, soul, and body.

Luci looks similar to a shadow, though it was shown that he can cast a shadow of his own, which seems to mirror the direction he was facing. Like many demons, he has a spearhead tail. However, when compared to the demons released in "The Princess of Darkness", which all have wings instead of limbs, Luci has arms and legs. Luci's figure has very little form or depth, and was accompanied with a large singular eye (that was shown), horns on his head, and fangs. His form often causes people to confuse him for a cat. While he, Bean, and Elfo are in Hell, Luci was temporarily changed into a Level 2 demon (bigger and with wings) and then into a Level 4 (even bigger and with larger wings).

Being a demon, Luci doesn't have a biological form. As such, there was no way of knowing whether his smoking, drinking, or drug-taking has any effect on his "health". Being an infernal creature, drugs may not harm him, although they clearly have an effect on him. Luci was immune to fire and was able to manipulate shadows at whim. His shadow abilities are shown in "Castle Party Massacre", when he makes out with a girl's shadow, but not the girl herself.

Throughout the majority of the first season, Luci's nature was apparently of the traditional demon: he was pure evil and not capable of love or compassion, while acting as a puppet for Cloyd and Becky in their plot. Luci's role was to guide Bean towards her destiny, which he does by generally encouraging her towards mischief and leading her astray. His actions are usually subtle, sometimes seemingly trivial and often significantly advance the plot. It was unclear whether he knows precisely in what way to guide Bean, but it was clear that he expresses no personal agenda throughout Season 1.

In Season 2, more of Luci's character was shown, and it reveals that he truly cares about Bean and Elfo, despite his constant deprecation of them, especially Elfo. As said in Season 2, Episode 10, he gave up his dream job and immortality for them without a second thought. This shows his loyalty and empathy.

Luci's behavior was chaotic, and seemingly random in places, yet in others, it was pivotal to moving things forward. Luci's actions vary from encouraging worse-than-normal behavior and actively disrupting events to being helpful in a crisis. Even though he was meant to steer Bean's destiny, he does so by influencing the actions of Zog and Elfo. For example:

It was implied that the mischief-making antics of demons act as a catalyst for destiny, which was why the Maruvians chose to use him for such purposes.

Despite his chaotic nature, Luci is shown to be a loyal friend to Bean, as seen when he comforts her in times of pain, fights beside her, and even saves her life on one occasion. Luci does seem to have a good side, though he refuses to ever give in to it. On one instance, he saves Bean from fire during an exorcism and feels genuinely sad during Elfo's funeral. In the episode Stairway to Hell, Luci and Bean travel to hell in order to try and find Elfo. When they arrive, Bean and Luci then travel to the Infernal Stronghold to find the Book of the Dead so they can pinpoint Elfo's location. While in the Stronghold, the pair are confronted by Asmodium, Lord of Darkness, who was also Luci's superior. Luci then exposes Bean as a human and tells Asmodium that he got "a dumb elf" to come down from heaven. Impressed, Asmodium promotes Luci to demon level two, which causes Luci to grow slightly bigger and earn his wings. Bean was dragged away appalled, realizing Luci's sinister plan all along. However, Luci later then breaks Bean and Elfo out of their bonds and attempts to fly them out of Hell. They are confronted by Asmodium again, and Luci drops Elfo and Bean to fall into a river of lava. Asmodium then promotes him to uber-demon level four, which causes Luci to grow larger. Luci then again betrays his boss and kicks Asmodium into a cliffside. Asmodium warns Luci Leave now and you'll lose your powers, your immortality, your parking space, everything!. Luci responds with It's a price I'm willing to pay! He then swoops down and catches Bean and Elfo, exiting through a volcano, Luci shrinking and losing his wings once they reach the surface. In the next episode The Very Thing, when the trio was rowing back to Dreamland, Elfo expresses indignation at the fact that Bean chose to save her mother over him. Luci, upset with the fact that Elfo was not appreciating their sacrifice, angrily exclaims "I gave up so much for you…" but then sulks and says ...I gave up a lot. Ending on a more somber note.

Luci frequently imbibes drugs. He was seen smoking (Twinkletown Gigglebud/Dreamland Ditchweed) and drinking (beer and wine), as well as partaking in Bliss in Love's Tender Rampage. His claim to be pretty high at the end of Castle Party Massacre and his hallucinations whilst on Bliss indicate that drugs have an effect on him.

In Bean Falls Down, he tried to save Bean from Dagmar, and his head got stuck into the elevator door. As Bean tried to rescue him (and keep herself calm), she accidentally decapitated him, instantly killing him. His head lay in Bean’s hand while his body ends up in the Trøgs mines. Seconds later, he appears in Heaven, much to his dismay. His last words before he died were "I don't know why you always bring out the good half in me Bean". In the next episode he managed to escape from Heaven by secretly going along with Jerry, who was allowed to return in order to save Bean.

"You know that little voice in your head that tells you to do the right thing? I'm the guy yelling over it. Yeah. I'm the guy that makes you feel good about doing bad things"
"Do it! Do it! Do it!"
"Some might say her cries for help were a cry for help, but I think she was just being an attention hog."
"You know, if there's one thing I've learned, it's when you're stuck in a cave with a psycho mom, the best thing to do is to play along."

“Queen Bean is Back from the dead, And orders you to spend your money at Luci’s pub!”

“I want to get rid of all the diseases plaguing mankind — and replace them with worse ones."

"Shut up! Silenzio! First up: not a ghost. Ghosts are losers that got murdered. I am a demon."

"Yeah! Work those scrawny nerd arms! Jiggle that demon back to Hell! Noice!"

"Hey, I'm still naked! I'm naked all the time, and you just didn't know! And now you can never UN-know it!" 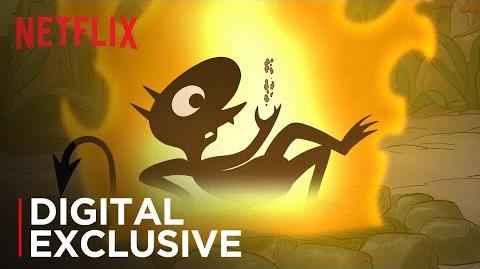 Luci ends up in heaven.