Prince Merkimer The I of Bentwood

Prince Merkimer is the son/nephew of King Lorenzo I and Queen Bunny. He was designated to marry Princess Tiabeanie when she accidentally caused Prince Guysbert to be impaled, his older brother/cousin, who was up until that point the groom-to-be.

Merkimer was the second Prince of Bentwood to attempt to marry Princess Bean of Dreamland. After his brother/cousin Guysbert famously fell on the Iron Throne and incapacitated himself, Merkimer was next in line to marry her. Elfo's jealousy of Merkimer led him to encourage Merkimer to drink a magic potion that consisted of pig and Elf Blood, without knowing what would happen. Unfortunately for him, he turned into a talking pig and became unable to marry Bean. His transformation turned him into a pathetic and lonely character, so much so, he lost his dignity over the mere mention of cabbage.

In Hey, Pig Spender, Bean located the Pig that took on Merkimer's appearance. Merkimer, acting as the pig's voice to trick people into think he has transformed back, goes with Bean, Elfo & Luci to Bentwood to ask for military aid. After being ridiculed not only by the subjects of Bentwood, but even his own parents, Merkimer and the Pig (who managed to learn speech) perform a coup and take over Bentwood. The Pig tries to get Bean, Elfo and Luci executed, however, Merkimer steps in, forcing the group to flee back to dreamland.

In the fourth season, he does not appear in any episode.

Prince Merkimer is an jolly, heroic and affable young man, but is slightly vain and full of himself. He believed that before he was to marry Bean she would have had an affair with him anyhow because he believes he is irresistible and obviously superior.

However, following his transformation, Merkimer was forced to reexamine how he interacts with others (especially women). Now that he can't rely on his station or looks and must actually make use of charm to get by, his more chauvinistic traits have become downplayed and he's generally become a kinder man.

Prince Merkimer as a human. 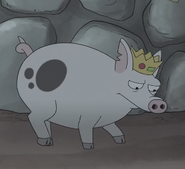 Merkimer after becoming a pig. 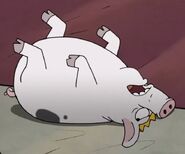 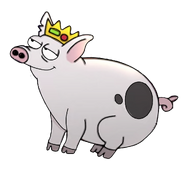 "The pig who thinks he's a prince"
Español
Community content is available under CC-BY-SA unless otherwise noted.
Advertisement