Swamp and Circumstance is the sixth episode in the Disenchantment series. It premiered on August 17, 2018

Bean tries her hand at diplomacy after King Zøg makes her ambassador to Dankmire, Queen Oona's kingdom, and an important ally for Dreamland. But after Luci spikes Bean's drink. Her extreme drunkenness angers Dankmire.

The episode begins with the annual Harvest blessing at Dreamland Castle, where farmers present their harvests for "his majesty's blessing and immediate confiscation." When Zøg finds out that Bean left the even to go drinking, he throws his scepter, which lands in the bar. Bean, Luci, and Elfo play drinking games, and sneak back to the castle late that night.

Zøg confronts Bean about her alcohol problem, at which she complains that she has no role to play in her father's life or the kingdom. Zøg decides to name her ambassador for the upcoming royal trip to Dankmire.

The royal family arrives at Dankmire, where they are greeted by grim Dankmirian locals who, "consider it rude to bow without bowing first." Luci messes with them by repeatedly bowing to get them to return the gesture. They watch a 16-act play performed by children, and Zøg decides to let Bean make the big speech at the banquet that night.

While at the bar, they are greeted by Chazz, who brings Luci and Elfo two shots of Dankmirian schnapps, and Bean soda. Luci spikes her soda with his alcohol, and she shows up to the banquet completely drunk She offends everyone with her drunken actions, hangs upside down, and pukes on he Dankmire master's robe., Angered, the Dankmirian master declares war and orders his guards to lock them up. In the chaos that followed, Oona and her servants escaped, and the rest were forced to flee into the swamp.

While running from the Dankmirians, Zøg and Prince Derek are captured by swamp-dwelling yokels, who decide to cook them and feed them to the Dankmirian swamp monster. Bean, Luci, and Elfo attempt to rescue them, but are knocked unconscious. The Dankmirians tie the five of them to posts to be eaten by the swamp monster raw, but Bean offers them alcohol from her pocket flask. She nearly gets them to let them all go, but Zøg calls them hicks, which angers them. The swamp monster then strikes, eating them, and Bean fights it off. They all walk home, at which point Bean is allowed to attend the harvest festival party, while Prince Derek talks to Zøg about his newfound fear of skillets. 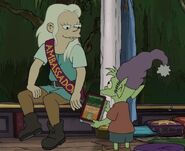