The Princess Of Darkness

The Princess Of Darkness

The Princess of Darkness is the third episode in the Disenchantment series. It premiered on August 17, 2018.

Sorcerio declares that demonic possession is behind Bean's drunken exploits-- and things look dicey for Luci when the king hires an eerie exorcist.

After a night of drinking, Bean, Elfo and Luci go on a joyride using Lady Lingonberry's carriage. This catches the attention of the police using Donkeys as sirens, after jumping over a out of service bridge, they leave Lady Lingonberry to drown. Unable to sleep, Luci encourages Bean to stay up all the next day, so they steal and eat some of Queen Oona's snakeroot which she uses to "sooth her nerves". While under the influence, the trio have a day of mischief, which culminates in them teaming up with a gang of criminals to steal relics from the Royal crypt. The hoodlums abandon Bean, who is then apprehended and taken to the palace the face punishment from her unwitting father. In frustration, King Zog's turns to Sorcerio for a cure to her rebellious ways.

With Bean locked up in her room, Sorcerio convinces the rest of the King's Counsel that Bean is possessed by a demon. Unbeknownst to them, they are being watched via the Oracle Fire by Emperor Cloyd and the Enchantress who now believe their plan has been discovered. In order try to exorcise Bean, Sorcerio uses all 3 available sciences but to no avail. The Counsel finally decide to call on the creepy looking exorcist Big Jo for help, forcing the Enchantress to conjure a spell which makes Luci conceal himself by entering Bean's body to escape his certain fate. Big Jo tries every tool he has to exorcise Luci while the demon tries to play it cool. After Big Joe sprinkles an exorcising star and sets in on fire, Luci regurgitates himself out of her mouth and puts of the fires with his tail, at which point Big Jo captures him inside a bottle along with many captured demons.

When Bean finds out what happened to him, but she initially doesn't care. While spending the day without Luci, Bean and Elfo begin to think about how much they miss him. They ask King Zog and Odval what Big Jo does to the demons. After finding out that he takes them to a volcano and kills them with extreme prejudice, the pair set out to save Luci, running into the gang that betrayed them on the way. Bean and Elfo beat them up and take back her dead families' belongings.

At the volcano, Big Jo drops a female demon and Luci's Lawyer into the lava. He then tries to kill Luci next but, after struggling and taking the exorcist's knife, Bean saves him. Seeing that Elfo is held hostage - and with no other choice - she throws the knife which chops Big Joe's arm off and falls into the lava. Emperor Cloyd and the Enchantress, watching via the Oracle Fire, are impressed at Bean's efforts. After freeing Luci (by crushing the bottle with a rock) Big Jo's carriage with many captured demons rolls away and crashes, freeing the demons. Luci calls this "a happy ending for everyone."

Sorcerio: "We can spout crazy theories all day but science suggests a more logical explanation: Bean is possessed by a demon!"
Emperor Cloyd: "Oh no! They are onto us!'"

Elfo: "Well, at least we saved Luci."
Bean: "But we released evil into upon the world..."
Luci: "A happy ending for everyone!"

Big Jo: "I shall soon cast thee out, demon, with these sacred tools."
Luci: "You're a sacred tool."

“Please do not feed my vehicle!”
— Police Sergeant to a boy who fed a carrot to the police donkey 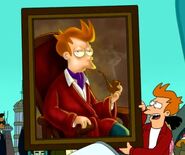 Portrait of Fry from Futurama, S07E02.